An analysis I did of a couple of chapters of Herodotus looks like it might be an interesting example to use for various treebanking approaches—both in terms of how things are structured as well as how they are visualised.

As the last assignment for my Postgraduate Diploma in Ancient Greek, I had to write a brief commentary of Herodotus 2.35–36, which catalogs (with hasty generalisations galore) differences between Egypt and the rest of the world. The catalog consist of a series of statements of the form “Egyptians do THIS whereas everyone else does THAT” or “[In Egypt] the men do THIS and the women do THAT [as opposed to the other way around like everywhere else]”.

In his commentary, Lloyd notes that this sort of catalog could be quite monotonous but that Herodotus avoids this through “skilful stylistic variation”. My commentary spent a decent proportion of its short word count digging deeper into this variation.

Quite coincidentally, Greg Crane sent me some examples of student treebanking recently in the context of how to compare analyses and they happened to be of Herodotus 2.35. They differ from each other and from my own way of thinking about the sentences. Note that these aren’t difficult or ambiguous sentences, though! The syntax is easy, I just don’t think most analysis conventions and visualisation tools do a great job of capturing what’s going on.

In my assignment, I started off presenting a canonical example of the construction and it’s that example that I want to show here. The original sentence is

But I started off considering these sentences:

Herodotus sets up the contrast with μέν and δέ postpositives.

He then alters the “constants” in the comparison, topicalising the direct object and eliding repetition of the verb. This results in:

The above was an indented structure I manually constructed for my commentary. It’s not machine actionable and is missing a lot but I think it does a decent job of capturing some of what’s going on. It makes clear:

It is these three properties that I think make this a particularly interesting example. 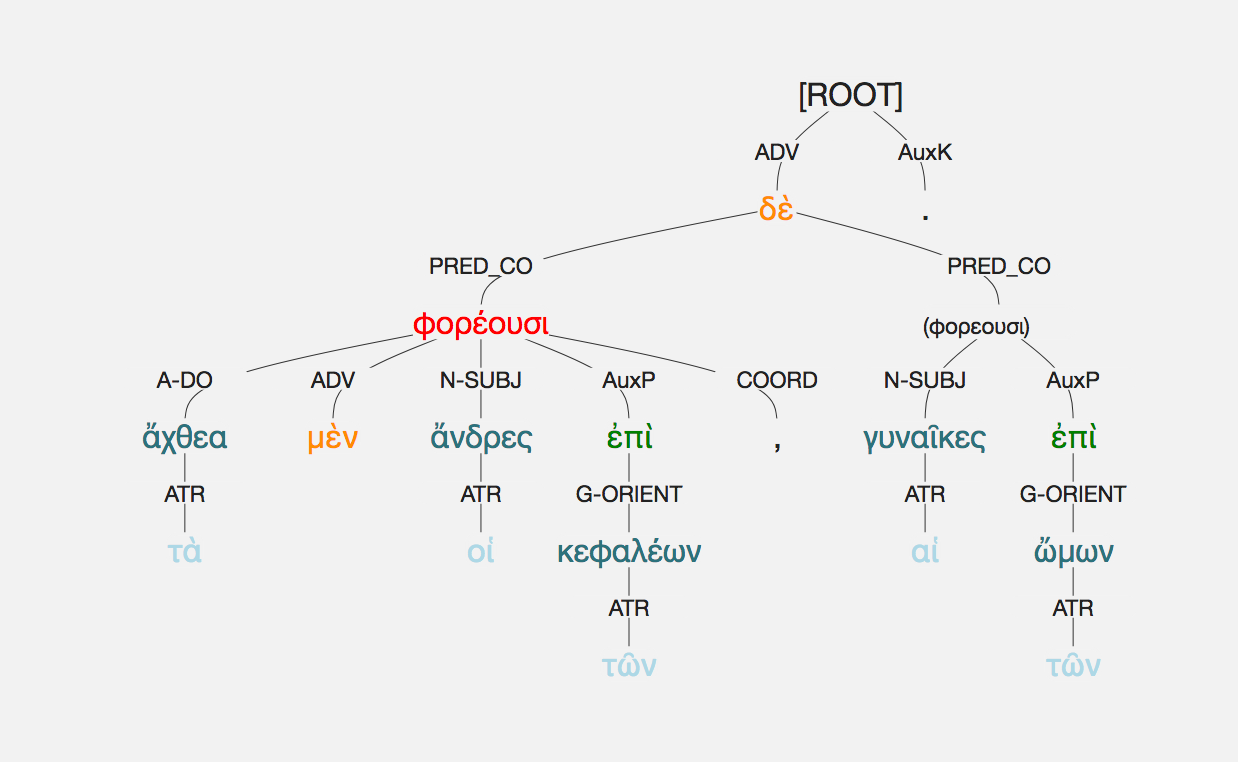 The student supplies the elided verb (although it’s not co-referenced in any way) but not the elided direct object. There’s no indication of the topicalisation.

It doesn’t quite seem right to me to say the two clauses are conjoined by δέ with the μέν hanging off the verb. I think of the μέν and δέ as equal partners in this construction and as tagging the two things being compared.

This analysis seems a lot more confused. The coordination is shown as being done with the μέν this time, with the δέ dangling. The prepositional phrases are shown as governed by the subjects rather than the verb.

To be clear, I’m not trying to critique the students so much as raise questions for analysis conventions and visualisation, especially for reading environments and querying.

Again, this (and the other sentences in Herodotus 2.35–36) aren’t difficult. I doubt either student had any trouble understanding the sentence. I just think it wasn’t clear how to adequately model their understanding of the structure.

I think elision and conjunction are the biggest issues in most analyses like this and good structures and visualisation for handling those will go a long way to making treebanks more consistent and more useful.

Using this sentence from Herodotus as an example, what are better ways of making sure analyses both enable useful queries and can be visualised in more perspicuous ways?

UPDATE: perhaps “coordination” would be better than conjunction as one of the “biggest issues” and I think “theticals” (HT: Jonathan Robie) could be added to that list to make the triad: elision, coordination, and theticals.

UPDATE 2: I also need to stop saying elision when I mean ellipsis! I’m spending too much time with morphophonology and not enough time with syntax :-)