← A Tour of Greek Morphology: Part 9
A Man Walks Into A Bar →

Part eight of a tour through Greek inflectional morphology to help get students thinking more systematically about the word forms they see (and maybe teach a bit of general linguistics along the way).

So far, just for the active, we’ve suggested the following contraction rules.

In this post I want to explain why these aren’t just an arbitrary set of sound changes and that they are really quite systematic. We’ll say a little bit about Greek orthography and build a model using some simple phonological features that explains the core contraction rules quite compactly.

Before I do that, though, I want to emphasize again that I’m not suggesting these “rules” need to be learned by the language learner. They are historical explanations for the spelling of circumflex verb endings in certain dialects and I’m discussing them to give people a flavour for linguistic description. The best way to learn the circumflex verbs is to produce and read them in context. It really doesn’t take long to just intuitively know that ἀγαπᾷς is a second person singular or that ἀγαπᾶν is an infinitive. You don’t need to know the contraction rules or how to model them with phonological features.

But if you’re interested in WHY the forms are ἀγαπᾷς and ἀγαπᾶν (including why one has an iota subscript and the other doesn’t) keep reading!

You’ve probably been told that ε and o are always short vowels. As far the LETTERS themselves go, in our standard Greek orthography, that is true. But a long ε and a long o existed as sounds in Classical Greek and earlier. Different dialects wrote these differently. Some just wrote Ε and Ο regardless of whether they were long or short. This is similar to Α, Ι, or Υ, which could be used for both the short and long variants. The Ionians, however, used the digraphs ΕΙ and ΟΥ for the long-Ε and long-Ο respectively. At the time, this was NOT the same sound as the diphthongs ΕΙ and ΟΥ, despite being written the same. It is likely that the long ε and long ο were pronounced with the tongue a little higher up (hence closer to the way ι and υ were pronounced) to reduce any confusion with η and ω which were pronounced with a lower tongue, closer to α. The digraphs ΕΙ and ΟΥ, when used for the long ε and long ο are sometimes called “spurious diphthongs” because they weren’t actually diphthongs at all, they were long monophthongs.

This purely orthographic convention explains why εε > ει and οο > ου. That doesn’t mean ALL occurences of ει are long ε or all occurences of ου are long ο. ει and ου CAN be true diphthongs, but when they come from ε+ε or ο+ο respectively, they are just long monophthongs.

Now as already mentioned, both short and long α was just written as α and so αα > α is a similarly straightforward contraction (the result being a long α). If you have a circumflex or an iota subscript, the α must have been long.

So the diagonals of this contraction table make sense:

Now ε+ο and o+ε both result in a long ο (written ου). The order doesn’t matter. The ο wins out over the ε and the ε assimilates to ο resulting in the equivalent to ο+ο.

Both α+ο and ο+α result in ω and again order doesn’t matter. At the time of the spelling standardization, ω was effectively in between α and ο so this makes sense.

Note, however, that α+ε and ε+α don’t behave the same way in our table above. α+ε results in α but ε+α results in η. We might expect both to be η given how α+ο and ο+α behaved. It seems that order matters in some cases but not others.

One way we can model all this is by assigning each of the vowels binary features of low, back, and round and making generalisations about those categories. 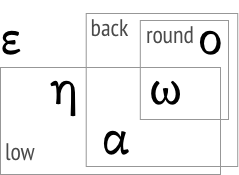 Note that not all combinations are possible and +round implies +back.

(We haven’t included ι or υ here as they don’t play a part in this analysis.)

The rules also explain why any vowel + ω goes to ω. In fact, if you work them through, these simple rules explain all 23 contractions in our list at the top of the post (and more that haven’t come in to play yet) with just one additional rule:

There are likely other solutions with other features and rules but my analysis roughly follows that of Sommerstein in The Sound Pattern of Ancient Greek, that of Bubeník in The Phonological Interpretation of Ancient Greek: A Pandialectal Analysis (which also considers differences in things like the Doric dialect), and apparently that of Lejeune in Phonétique historique du mycénien et du grec ancien (on which Bubeník’s is based). This style of analysis is typical of the early second half of the twentieth century so I’m not claiming it’s in any way state-of-the-art. But it demonstrates that the contraction rules are very systematic.

The Difference in the Infinitive vs Indicative

What this tells us is that the ει in the ειν ending in the infinitive is a spurious diphthong but the ει in εις and ει in the second and third person singular actives are true diphthongs.

← A Tour of Greek Morphology: Part 9
A Man Walks Into A Bar →